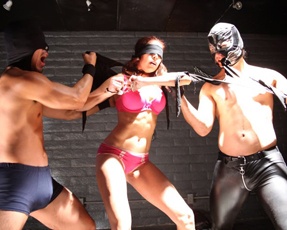 The next generation of underground cage fighting has arrived! Five contestants will fight but only one will be left standing. The first match pits young Mari vs the much older French fighter Jean Paul. This will be Mari’s first cage fight while Jean Paul is no stranger to the ring. After a few minutes of pre-fight prep, Mari is confronted by Salene on her way to the ring. She has heard of this nasty Swede’s reputation…perhaps they will face each other before the night is over? Mari certainly hopes so. No more waiting.. Mari turns and enters the cage where Jean Paul is waiting… May the best man or woman win!

She entered an underdog but finished a dominant power. Young Mari stands proudly over the beaten French fighter Jean Paul, his body laid as the next challenger makes his way to the cage. His name is Dutch, his origin unknown, his reputation for cruelty known by all. Meanwhile, Salene prepares to face whoever the victor might be. He / she, no matter. The Swedish fighter has not lost a match since coming to America in 2010 and she doesn’t plan to start now…

Swedish fighter Salene approaches the cage, her victorious opponent eyeing her with contempt. She enters slowly, circling the warrior with raised hands… bodies poised to strike. Within seconds the fight is on, knees, punches, fiery galore! Strong as he is, the cruel Dutch cannot seem to break the Swedish beauty. Instead he is soon face down on the ground, peering upward to find the reigning champion entering the mix. Herc is awesomely chiseled, his clenched hands destroyer machines. Salene stands her ground, glaring approvingly at her final rival. Yes… good. Finally a man worth fighting! Without further delay, she launches into her charging foe!

Part 4. – Escape from the Grind House

She made a mockery of the local male fighters, even bludgeoned the champion’s face until his broken body had to be dragged from the cage. Did she honestly think they’d let her just walk away? Not in this town baby! Salene barely makes it to the door before she is gripped from behind, her limp form dropping from the cruel blow to the head. The Swedish fighter is dragged deep into the belly of the grind. A dark world that makes illegal cage fighting look like a stroll thru the park! She stirs to life as heavy metal blasts in the background, her psycho captors intent on welcoming her properly to the seedy world of fiery S&M. Salene has never felt more at home… Let the fighting begin!

Add to cart
Add to My Favorites