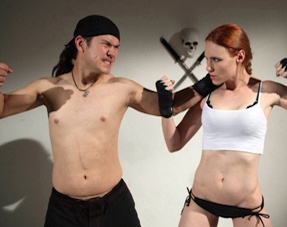 Living in the shadow of Salene has not been easy for young Elsa…  Salene the Great, Salene the Unbeatable!  Alas, the day has finally come for Stockholm’s notorious daughter to step aside!  Elsa arrives in Los Angeles with only a bag, her fists and an unbeaten streak as impressive as her sister’s!  Finding her will be easy… simply follow the line of beaten male fighters and eventually she’ll find you!  Elsa is close and she knows it!   Look out Salene, your young sister has traveled far from Sweden to wipe the floor with your pretty little barbie doll body…  Her match today takes her one step closer to her ultimate reward.  Some local champ claims to know exactly where Salene is and Elsa knows exactly how to make him talk!

Sexy Salene’s ruthless domination of the underground circuit has finally made her the number one pit fighter on the west coast. Each new challenger torn apart by her deadly bare hands! Today’s match pits the reigning champion Salene against the former male champion Kiet Singh in an all out battle to the finish! Trailing Singh to the fight is Sweden’s other rising star (and Salene’s pyscho sister) Elsa. Years of animosity and the desire to be the best have brought young Elsa to this very moment where she will prove herself to the world! Fight well Salene for your ultimate destiny lie lurking within the shadows…

Elsa looks on from afar as her deviant sister systematically destroys the male champion! With his body sprawled upon the ground, she enters the fighting area to greet sexy Salene face to face! The Swedish vixen has been looking forward to this reunion for a long long time. If there’s one thing we’ve learned from these two, this fight will end like it starts… fiery!

Add to cart
Add to My Favorites